Treherbert Brass is one of the longest established music groups in the South Wales area. Historians believe it was originally the Treherbert Drum and Fife Band, in existence around 1897, which was the forerunner to today's band. It was however the brass band set up by the miners of the Glenrhondda Colliery which really put Treherbert on South Wales' musical map.

Glenrhondda was opened in 1911 by the Glenavon Garw Collieries Limited, a member of the South Wales Coal Owners association, and was served by the Rhondda and Swansea Bay railway. It consisted of two levels a slant and a pit and during its lifetime employed anywhere between 200 and 500 men, producing both house and manufacturing coals.

After nationalisation the colliery was placed in the National Coal Boards' South Western division's, No.3 Area, Group 4 and at that time No.1 and 2 pits had a combined manpower of over 450 men, whilst the No.2 level employed approximately 70 men. The no.2 level had closed by 1954 and the colliery as a whole was closed by the National Coal Board in 1966 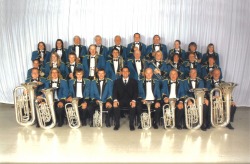 After 2012, the band ceased competing and today is a non-competitive symphonic brass ensemble, performing regularly at community events and concerts throughout Rhondda Cynon Taf and wider. If you would be interested in engaging the band for your event, please contact us here

The group also continues to maintain a firm commitment to training young people in the art of brass playing. Further information on our Youth Band programme can be found here